Even in the lovely city of London, there is really no need to see Big Ben and Parliament more than once (well, except the obvious).

I’m in London now and just gave a fun talk at SOAS. I came down here from Oxford, and the timing was such that I had two free days in the city. Since I’ve been here before, I really only had one sightseeing goal in London. I wanted to meet Hercule Poirot.

Or at least see his house, which fans of the show will remember was a sexy art deco building called Whitehaven Mansions. The real building was easy enough to find, and not so far from my hotel, so I headed over to get a look. 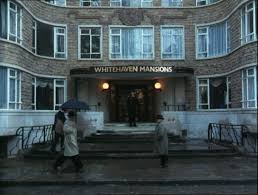 The building was there, as promised (thanks, Internet!), but the experience was somewhat underwhelming. To my surprise, Poirot himself did not come out, even when I hummed the theme music. More to the point, the actual building seemed somewhat past its prime, with noisy construction in front, and some ugly 1970s-ish tower blocks just behind.